I know this may come as a shock to those of you that know me well but I tend to obsess about things. I worry and I lament and I obsess. I wouldn’t say I have a difficult time making a decision but once made, hmmm, was it right?

For September, I will add the mantra, it is what it is to my repertoire of resolutions for 2015.

So this month, looking back at the previous resolutions, I am going to let it be what it is.  No need to rehash them.  Some good, some bad. Some improvements, some not so much.

January was the push-up challenge-

February was take it slow month-

March was the time to just breathe-

April was the time to sit up straight.

May was intended to help me refrain from commenting on my husband’s terrible driving.

June. I need to get fresh.

August:  Letting it be.

I hope at the end of this year I have learned something, changed something and accepted something.  That really is what it is. 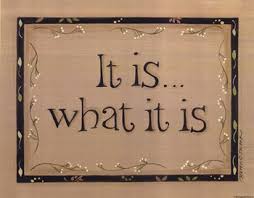 Who knew a baked brie could be that dangerous?

Things I tell my dog-how do you self-soothe?

How do you self soothe? Family, children, finances, health issues, we all…

They say bread is life, I say not without cheese!