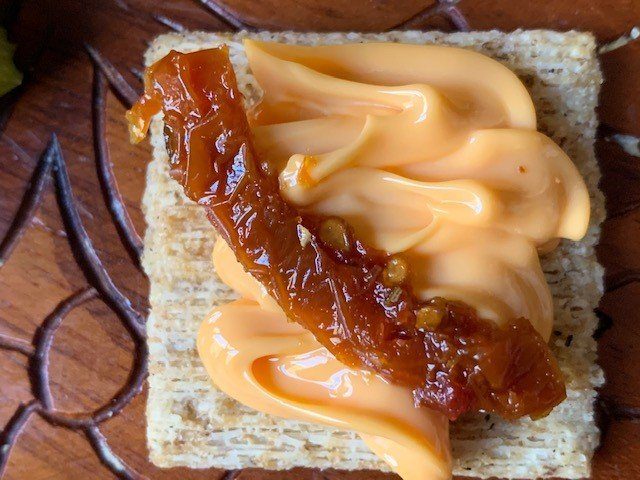 Cheesemaking has evolved from the ancient Greeks to modern-day farming and production methods. Various cheeses have been produced in this country since the 17th century. According to the International Dairy Foods Association, more than one-third of all milk produced each year in the U.S. is used to manufacture cheese. I do not believe that the ancient Greeks ever imagined that cheese would come in a can. Enter Easy Cheese.

What is the definition of cheese?

According to Merriam-Webster, Cheese is a noun and defined as “a food consisting of the coagulated, compressed, and usually ripened curd of milk separated from the whey.”

My definition of cheese goes a little bit further and is beyond emotional. Cheese heals the soul and when properly used can turn a rainy, gloomy afternoon into a charcuterie food platter extravaganza. Cheese makes people happy.

When Danny Wegman built his supermarkets with his mind-blowing cheese departments, I can assure you that Easy Cheese did not secure a place on the floor plan between Burrata and Mimolette.

So why did I choose to review Easy Cheese?

This cheese review is an ode to my brother Joey. I love my siblings, Amy, and Joey. My brother Joey has always rested right on the edge when it comes to food. He truly believes Spam is predominantly composed of (real) meat, and Dinty Moore Stew is a healthy and enriching dinner solution.

Easy Cheese, or Cheese Whiz as we called it when we were kids, was definitely on Joey’s top food list. Portable and easy to carry, never needing refrigeration, Easy Cheese topped his hit parade. Since I do not believe he has eaten Easy Cheese in the past decade or two, I thought I would purchase a can and give it a shot. But first, I needed to know more.

What is Easy Cheese?

I needed to understand how cheese came to being stored in a can. According to the fine folks at Wikipedia,

Easy Cheese is the trademark for a processed cheese spread product distributed by Mondelēz International. It is also referred to as aerosol cheese, spray cheese or simply cheese in a can, and is similar to squeeze cheese (a semi-solid cheese food from the 1970s packaged in a squeezable plastic tube). Easy Cheese is packaged in a metal can filled with air covered with a plastic cap that reveals a straight, flexible nozzle where the cheese is extruded.

The product was first manufactured and marketed by Nabisco in 1965 under the name Snack Mate until 1984. Advertisements often displayed the orange product adorned in flowy peaks atop several different types of Hors d’oeuvres. As a 1966 advertisement says, it was “instant cheese for instant parties.”[1] Easy Cheese is currently available in Cheddar, Sharp Cheddar, Cheddar ‘n Bacon, and American flavors. Discontinued varieties include Pimento, French Onion, Cheddar Blue Cheese, Shrimp Cocktail, and Pizza.

A new addition to spice up your charcuterie board.

Our empty nest status affords us the ability to get creative with dinner menus.  Sometimes you just feel like eating light, and a charcuterie board is the perfect no-fuss dinner. A delightful mix of cheese, meats, nuts, and fruit, sometimes with a special piece of chocolate, it never disappoints.

At no time, ever, did I entertain the thought of Easy Cheese securing a place on my charcuterie, but I’ll keep an open mind. Below you will find my attempt at Easy Cheese creativity.

Sharp with an exciting and very unique palate finish.

(Ok, I am being kind) Between the time I created the presentation, started to write this post, and returned to taste my work, the chemical breakdown began to occur. It was not pretty. I used cracked pepper Triscuits, and thankfully the pepper was the predominant taste my poor senses experienced.

I am not a cheese snob. However, I do wish to spend whatever calories I choose on breathtaking and engaging cheeses. While Easy Cheese weighs in at a mere 80 calories for two tablespoons (notice it is not by pounce or slice). I would prefer to sign up for another spin class and consume 110 calories for one magnificent ounce of Drunken Goat.

Full disclosure, I could not get the taste out of my mouth. It took a package of Chili Roasted Pistachios to reset and apologize to my taste buds.

There is a place for Easy Cheese.

I am a University of Alabama parent and fan. I believe the proper place for Easy Cheese exists on the tailgate party platter of an Auburn or Clemson aficionado. Cheese Heals will resume its reviews of notable cheeses when we meet again. Keep an open mind, as I did, and branch out and try some of the cheeses highlighted on the website.

And you know what, taste Easy Cheese and let us know your thoughts in the comments section.

Thanksgiving is in our rear-view mirror, and we look ahead to Christmas.…

Five things to have on hand this holiday season

In a few short weeks, the thanksgiving holiday will be upon us.…