As an Italian American, I understand the term “Ginny” or  “Guinea” is distasteful. I looked it up on the Urban Dictionary and is it described as a very unpleasant term.  P.S. do NOT read the Urban Dictionary.  Holy Cow. It would make Webster blush. I think I needed adult supervision and someone to interpret for me.

The term “Ginny” is added to the description of many things. A man’s white tank-like undershirt (Ginny-T) or  an over weight Italian (“Ginny-ball). My friend Jackie dubbed “Ginny Goodbye” to describe the way all leave a class, event or party and the absorbanent amount of time it takes to actually leave.  I think the  “Ginny Goodbye” takes so long because many Italian families, mine included, are so large that it takes time to be sure to say goodbye, kiss and get/give a parting piece of advice, criticism or guilt before you actually go home.

Many Monday nights after Zumba class ends at 8:30, we pack up our things and head out.  We end up talking outside the gym for 10 minutes, in the parking lot for 10 more and at our cars with the doors open for yet anbother 10.  That makes 30 minutes of goodbye-ing.  At this point Jackie usually walks out and comments on the Ginny Goodbye.  Case closed. But…

In that 30 minutes, I have learned something about my friends that did not come up before the Zumba class, during the Zumba class or after the Zumba class.  It came out somewhere in that 30 minutes.  Someone having an issue with an ill parent or a troublesome teen or a husband/boyfriend situation.  Sometimes the endorphins from the class did not fix what ailed us.  We needed each other to chat about it.

My 5:30am classes have a Ginny Hello and a Ginny Goodbye.  How lucky am I?  Just this morning I learned that a fellow rider (spin) courted his wife by learning the flute and he himself is a musician. Lucas makes goat cheese (honeybee farms) and brought me a “Tuscan sunset” goat cheese that I am going to make a pizza with Friday night!  Monday mornings are “Plank Mondays” and these strong women can hold a plank for 8minutes 30 seconds while discussing recipes, in-laws and telling jokes. Then we go to the parking lot and it starts again!

My Italian heritage has made me what I am and the slang terms that we slide into everyday conversation while talking flagrantly with our hands makes me proud to be an Italian-American.  If you want to be a part of my Ginny Goodbye, just slow-up as you walk by and one of us will drag you into the conversation and  30 minutes later you will be on your way with at least one life lesson and a smile. 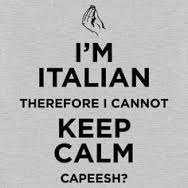 I am Italian and by definition, that makes me superstitious. I was…

A trip to the DMV…with my mother.

Ah, I bet when you read that headline, you got the heebies…

Relegated to the back seat