Who is your Christian Grey?

Mine is dark and complicated.  He is intense and at the same time, soft and gentle.  He is 50 shades of mess but my inner goddess does not care.  Either does the inner goddesses of the other 100 million people who read the trilogy. I had a face and body in my mind as I read those 1000 pages.  I thought about his eyes, the way the pants fell on his hips and that kiss which I have always felt is the most sensual and sexual part of the process.

There are hard and soft limits to what readers will tolerate in terms of creating the movie without destroying the storyline.  Frankly, I don’t how they are going to film it.

Sorry, but my Christian is not Jamie Dornan. He’s fine but he is not Christian Grey. The Today Show had the lead actors on and the chemistry between Dornan and Dakota Johnson was not there.

I read that series straight through– all three books.  I stayed up all hours of the night by the light of my Kindle. Fifty Shades was talked about at work, amongst carpool moms and total strangers.  The phrases and that infamous grey tie became commonplace discussion and reference everywhere.  “Laters” was spoken everywhere and I think Audi made a fortune off the references in the book.  I love my Audi, and Chip, but let’s be honest it’s not the same.

There are conservative groups that say the book was harmful to women. Some countries have already banned the release. I know a few people who did not read it because they thought it was disgusting.  But that’s what makes America great…it’s your choice.   I wish the Nay-Sayers read it because it may have made more sense if they did. Then you can have a first-hand opinion.

Fifty Shades was in my purse during LAX carpooling. I read it during warm ups at the basketball game; in line at the supermarket and a few other places that no self-respecting married woman would admit, or not?  I have an entire blog category on the Fifty Shades. Chip (my 20 shades) says it’s the best book he never read.  Could that have been a prelude to the broken ribs? I’ll never tell.

The trilogy opened my mind.  During that time, I branched out and took an exotic dance class (the pole dancing class was harder to do).  I went to the movies with the Zumba Ladies to see Magic Mike (Wow that was something) and we all started reading other books in that genre.  That’s a long way away from St. John the Evangelist school and the risky behavior of rolling your uniform skirt so it’s shorter.

All that said, I just don’t see Jamie Dornan as that guy. I see Matt Bomer.   He has the eyes, the build and that darkness about him that brings you in closer to  see what he is really all about. I can see the pants ‘hanging off his hips’.  He is driving that Audi R8…and Ooooo, I need a break…hot flash.

Maybe Ian Somerhalder? He has that same smokiness and darkness. Not darkness in a Criminal Minds kind of way.  Just that bad boy edge. Hmm.

I’m sure I will hear from many of you. I have wonderfully liberal and conservative friends and I am so happy that we can all discuss this openly, calmly and without prejudice, right?

So who is your Christian Grey and will you see the movie if Jamie Dornan is not your guy?  My inner goddess is saying quite possibly no, I may wait for DVD. I guess we should all keep an open mind: about actors, about content and about what prior to Fifty Shades was a topic that was rarely discussed but often contemplated. No twitchy palms. 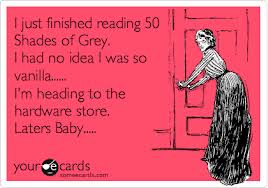 A view from the corner in Starbucks

This morning, slightly after 6am and with a failed attempt at working…

Literally, I am so hot. Ladies, you know what I mean.  Gents,…

Ok let me just admit it for us both. Christmas is stressful.…